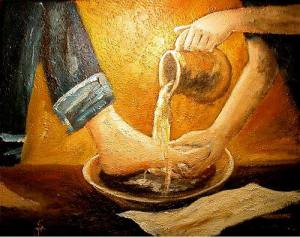 What is real love in leadership? How is it shown by the fruits of it, like humility and service?

Rather, what we may think is leadership; let’s look to servanthood in action. Look to our Lord, how did He lead? Did He give dog and pony shows or feel good messages to tickle people’s whims, or real effectual leading by example and heart?

Let’s look at the foot washing. Before the Passover festivities, Jesus knows His time on earth is almost over, so He takes an opportunity, during the eve of His betrayal and coming crucifixion, to teach a powerful lesson of servanthood and humility.

In so doing, He shows what real love is by the fruits of it-humility and service.

A lot was going on; two of His most trusted Disciples were going to betray Him, one overtly and one by fright and panic. It seems that the devil was having his day in the playroom with the full temptation and influence, but Jesus realizes what is going on. He knows what His mission is and that His power and authority are assured. He gets up from the table to do what only the lowest of slaves would do.

This was during the evening supper. What we would call dinner was also a time for visiting Rabbis to give instructions and teaching; Jesus follows this cultural setting. This may have been at the Passover right before His betrayal and execution-either the “Last Supper” or a meal prior to it (Matt. 26:26-28; John 12:2).

Jesus Got up. Jesus did not forsake or forget His role; rather, He willingly got up to serve, thus taking the place of a servant, a prequel to His role as Redeemer. Culturally, people were seated by their social rank: a Rabbi would usually have an honored position. For Jesus to get up from that position was an infringement to the social statutes of the times and an insult to any religious leader who may have observed it.

Why did Jesus do that? He came to serve! This was a gesture of humility that was culturally honored, but rarely practiced, especially by people who would be considered elite. And who is more elite than God? People then sat or reclined on a pillow or a carpet at a low table with their feet outstretched away from the table and other’s view. Feet were considered socially disgusting, as they were often very dirty. Thus, Jesus would circle around the table behind people, which was very socially awkward, almost a taboo or something one of status would never do. This is why Peter objected so. He was not being disrespectful; he was trying to protect Jesus’ dignity. Jesus wanted to teach him a grander lesson.

Then Jesus did something even more humiliating, He took off His outer clothing.

An outer coat-like garment was removed, but not just to keep it clean; it was a gesture of extreme humility. This is a fulfillment of Isaiah 53 regarding the humble, suffering Messiah that Jesus demonstrated-not the warlike messiah that Judas and the people in general wanted.

So, everyone experienced shock and awe as they watched the Lord Creator of the universe remove His coat, put on an apron, and holding a dirty, disgusting bowl used to wash dirty feet before entering the home, He kneeled down to wash His Disciples feet. This caused a reaction of conceit for the prideful (like Judas) and wonderment to the devotees.

Peter was extremely perplexed over this and exclaimed, No Lord, do not wash my feet! But Jesus replied, you do not understand, but one day you will. Peter still protested and Jesus said if you do not allow me to serve, you cannot belong to me. So, Peter submitted and even asked Jesus to wash his entire body. Jesus explained to everyone that this was not about being cleaned or taking a bath; this was about something far greater and warned that there was one present who was not spiritually clean.

Jesus then said, you call me teacher and Lord, and wonder why I did this thing, but I call you to wash each other’s feet too. Allow me to be your example and do for others as I have done for you. A servant is not greater than his master, nor is the message more important that the one who sent it. You know this; so do as you have been taught and you will be blessed!

What was Jesus end game here? To show us all, the full extent of his love.

Jesus clearly tells us what a leader is and how one should act and work. It is not about pride or power or control; it is about being a servant.

A pastor or a Christian leader must not be in leadership just to command or be in charge for any reason beside how do I teach and exhibit Christ and what is the best way for me to do this? Leadership must not be to satisfy one’s pride or desires, or for personal gain. Rather, we are to point others in His direction by our example.

How and why is leadership learned from first being a child of God and a servant of Christ?

What happens when our direction comes from the latest ideas, or what we think will work?

Pastor, Teacher, Missionary, Researcher, Church Planter, Author and Equipper. Dr. Richard Joseph Krejcir lives in Southern California and is married to the beautiful MaryRuth and a precious son Ryan, a miracle from God. He is a child of God who is committed to biblical understanding, prayer, spiritual growth, and integrity. He is the Founder and Director of Into Thy Word Ministries, a missions and discipling ministry, with a call upon his heart to bring discipleship materials to pastors and everyone who needs them here and overseas. He is also a researcher at the Schaeffer Institute and spent over fifteen years on an in-depth, careful and through study on End Times. He is the author of numerous articles, curriculum's and books such as "Into Thy Word," and is also an ordained pastor, teacher, and speaker. He is a graduate of Fuller Theological Seminary in Pasadena California (Master of Divinity) and holds a Ph.D. (Practical Theology) from London. He has amounted over 25 years of teaching and pastoral ministry experience including serving as a church growth consultant.
View all posts by Biblical Guy →
This entry was posted in church leadership, pastor’s and tagged authority, crucifixion, example, feet, Foot Washing, gentle, Humbleness, Humility, imitation, leadership, meekness, power, real love, Servant, Servant Leadership, Servanthood, serve, Service, wash. Bookmark the permalink.